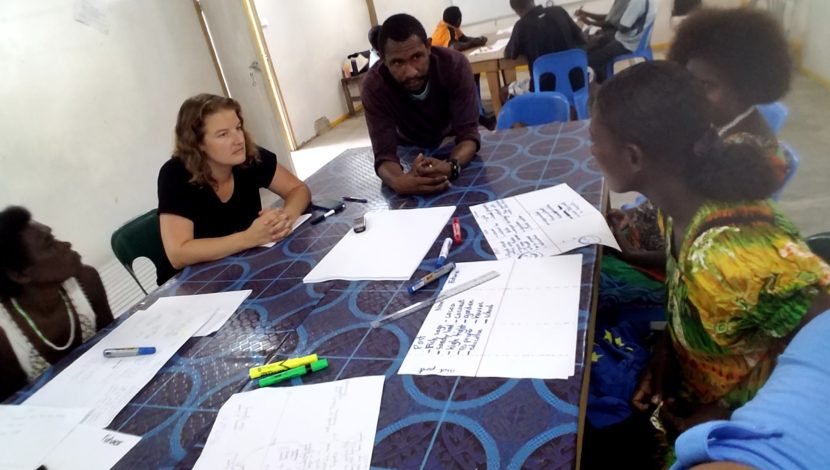 UUSC has a growing number of named endowment funds established by individual donors, often to honor the memory of a friend or family member or to commemorate a special occasion.The income from the funds provides an important source of revenue* to UUSC for general support or specific programs, as designated by the donors.To discuss how you might be able to establish a named endowment with UUSC, please contact Cassandra Ryan at 617-301-4340 or cryan@uusc.org.

Arlene A. Bartlow Endowment Fund
Established in 1997 by Arlene A. Bartlow, the income from the fund may be used only for UUSC programs of service, advocacy and education which improve the lives of women and girls.

Beverley V. Baxter Endowment Fund
This endowment honors Beverley Baxter who served on the UUSC Board of Trustees from 1985 to 1991 and co-chaired the 50th Anniversary Capital Campaign. The campaign enabled UUSC's purchase of a building at 130 Prospect Street in Cambridge, Mass., which served as UUSC's headquarters until 2007.

Rev. Shannon Bernard Memorial Fund
During her robust life, the Rev. Shannon Bernard was a housewife, cab driver, trucker and psychologist, experiences that provided excellent training for the Unitarian Universalist ministry. During her 13 years in White Plains, N.Y., Rev. Bernard's Community Unitarian Church experienced considerable growth and today is one the strongest churches in the Metropolitan New York District.

Mildred K. Bickel Endowment Fund
During her lifetime, Mildred K. Bickel established the Charitable Remainder Unitrust of Mildred K. Bickel. It was her instruction that at her death, one-third of the residue of the trust be used to establish a named endowment at the Service Committee, to be used by UUSC at its discretion.

Martha Sharp Cogan Children's Endowment Fund
Established to honor Martha Sharp Cogan's lifelong commitment to children, the income from the Children's Fund may be used only for UUSC programs that improve the lives of poor and oppressed children around the world.

Warren H. Cudworth Endowment Fund
Established by the Unitarian Church in East Boston, this fund honors Warren Cudworth who was its minister and served as a chaplain with Union troops from Massachusetts during the Civil War.

Rev. John W. Cyrus Endowment Fund
This endowment was established to honor John Cyrus, a much-loved and admired parish minister of several churches, including the First Unitarian Church of Milwaukee, Wis. In an editorial in the Milwaukee Journal following his death in 1981, Rev. Cyrus was remembered as "a preacher of rare poetic grace."

William Emerson Endowment Fund
This endowment honors William Emerson, the first president of the Unitarian Service Committee at the outbreak of World War II. He led a program of humanitarian relief and rehabilitation unrestricted by nationality or religion.

Mary-Ella Holst and Guy C. Quinlan Endowment Fund
The Unitarian Church of All Souls in New York City honored two longtime members and activists in 1996 with this endowment fund. The husband and wife team have been loyal members, volunteers and supporters of UUSC since the 1970s. Mary-Ella is a former member of the UUSC board of trustees and Guy is a past board president.

Hu Endowment Fund
The Hu Endowment Fund was established in loving memory and in celebration of the lives of Henry and Mabel Hu. The Hus' children, Helen and Howard, together with Howard's wife Sudha Kotha-Hu established the endowment to provide general support for the human rights work of UUSC, particularly in Asia. Henry Hu emigrated to the United States from Shanghai, China, in 1947 to study engineering at Harvard University. After graduation, Howard met and married Mabel Liang. Henry was a passionate believer in human rights and equality. Mabel had a passion for volunteer work. Both became Unitarian Universalists.

Mary Kornblau Endowment Fund
Born in Birmingham, Ala., in 1922, Mary Kornblau was deeply concerned with human rights and advancing justice for all. A contributor to UUSC for many years, she also supported the North Shore Unitarian Church in the Chicago area and the Unitarian Congregation of Fairfax in Oakton, Va. Ms. Kornblau was an avid gardener and was an accomplished artist who won numerous prizes for her paintings and drawings.

Alexander McNeil Endowment Fund
This endowment was established in honor of Alexander McNeil, a prominent layperson in the East Boston Unitarian Church, by his widow. Income from the fund is restricted to supporting the needs of children.

William U. Niss Endowment Fund
This endowment was established by William U. Niss, a resident of Maine and a committed Unitarian Universalist and supporter of the Service Committee.

Dorothy Smith Patterson Endowment Fund
Dorothy Patterson, a resident of Berkeley, Calif., is a former UUSC board president. Before becoming president in 1993, Ms. Patterson served on the American Civil Liberities Union of Northern California and was on former Gov. Edmund G. Brown Jr.'s Advisory Council on Vocational Education. Ms. Patterson has represented UUSC in the international human rights community, including the 1995 World Conference on Women in Beijing and on a fact-finding mission to Haiti while the country was under the rule of dictator Raoul Cedras.

Dr. Richard S. Scobie Endowment Fund
This endowment was established to honor Dr. Richard S. Scobie, UUSC's executive director for 27 years. Upon retirement in 1998, Dr. Scobie had tripled the size of the staff and financial resources, and charted UUSC's evolution from a development to human rights agency. Income from the fund provides unrestricted support for UUSC programs.

Waitstill H. Sharp Endowment Fund
This endowment honors Unitarian minister Waitstill H. Sharp who, with his wife, Martha, served as the Unitarian Service Committee representative in Europe during and after the Nazi invasion in 1939. Waitstill also worked for a number of relief and social service agencies after World War II.

Mary Trumpler Endowment Fund
Established by Alfred Trumpler to honor his late wife, the Mary Trumpler Endowment helps empower women and children throughout the world. Mr. Trumpler plans to give to the endowment each year for the rest of his life and invites others to join him in supporting UUSC's work for these underserved populations.

50th Anniversary Program Endowment Fund
In honor of UUSC's 50th anniversary in 1989, funds were contributed to this endowment by many hundreds of members and supporters. Income from the fund is restricted to program services.

60th Anniversary Program Endowment Fund
Many loyal members, friends and supporters of the Service Committee donated gifts to UUSC to commemorate the organization's 60th anniversary in 1999. All contributions were counted toward UUSC's Endowing the Struggle for Justice Campaign.

Alba and Doyle Bortner Endowment Fund
This endowment was established by Alba and Doyle Bortner, longtime members of the Unitarian churches in South Nassau (Long Island, N.Y.) and Montclair (N.J.). Alba, a graduate of Wilson College, was a high school English teacher and, after receiving a master's degree in library science from Rutgers University, was head of Children's Services at the Montclair Public Library. Doyle, a graduate of Gettysburg College, received his master's degree in history from Pennsylvania State University and his doctorate in educational administration from Temple University. After holding professorial and administrative positions in several colleges and universities, he served for many years as dean of the School of Education at City College of City University of New York. He was the author of numerous publications in the field of education, including books on school-public relations.

We have endeavored to make these lists as accurate as possible. Please notify our Insitututional Advancement Department of any errors or omissions by contacting Cassandra Ryan at 617-301-4340 or cryan@uusc.org.

The information on this website is not intended as legal or tax advice. For such advice, please consult an attorney or tax advisor. Figures cited in examples are for hypothetical purposes only and are subject to change. References to estate and income taxes include federal taxes only. State income/estate taxes or state law may impact your results.